Where are Your Feelings Coming From? 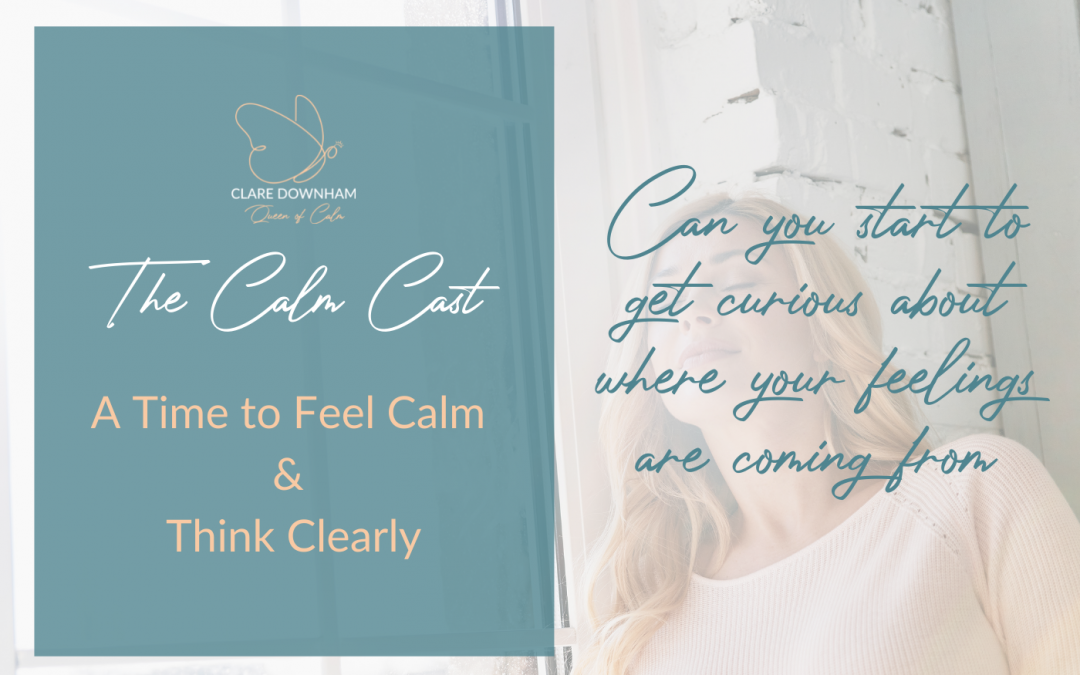 Today, my invitation to you is to get curious. In fact, that’s always my invitation to you. Curiosity really can shine a light on some areas in your life, where you perhaps don’t feel the way you want to feel. I am talking about feelings. Where do you think they come from? That is the question.

It looks like there’s a real rule about where our feelings come from. You probably learned it when you were really small. For example, do you remember your mum standing at your bedroom door, shouting about how angry she was being made by your untidy bedroom, and your lack of tidying it? Now that untidy bedroom may not have been the thing for you. Perhaps there was something else. I think we’ve all been told time and time again, that we are controlling the feelings of the people around us. We are making somebody feel a particular way. And that starts when we’re very young.

But it also starts when we are encouraged to think about our own feelings. So, for example, perhaps you have a situation in life that isn’t particularly going well as a child. Something you’re unhappy about. And as you cry, there is that reassurance, that well-meaning, beautiful reassurance from a parent telling you that you will feel better once this thing is over. So again, we get hooked on the idea that our feelings are being caused by the things that are happening around us. What you might call your circumstances.

Perhaps you’ve noticed already, that doesn’t quite work out in life. Maybe you’ve noticed that you can feel a certain way about something, really quite energetically, but that other people don’t feel the same way as you. I think we’ve seen in the last year of 2020 and 2021. We’ve seen that playing out quite openly amongst people who’ve shared their experiences of being in the different situations that we’ve been in over the last year or so. Because it turns out it doesn’t quite work that way.

Curious about where our feelings are coming from?

What I’m inviting you to do, as I’ve already said, is to just get a little bit more curious about where feelings are coming from. So, you may have also noticed that as well as you responding differently to other people in different circumstances that your feeling state (how you’re feeling) can really vary depending on your state of mind, on your mood, even when circumstance stays the same.

So a really great example of this is that if you’re in a job that you don’t like. It might even be just a circumstance that you don’t like, but let’s take a job. It’s a great example. And you may have noticed that even though you’re in the job on a Friday afternoon after lunch, that suddenly, you’re still at work and your mood lifts. Your mood lifts don’t it. You’re still at work, the circumstances is still the same. The boss is still annoying. There’s still far too much to do. Your workload is still gigantic. And yet, as you come into Friday afternoon, you notice that your mood is lifting. Your circumstances haven’t changed at all. Not one little bit. Everything that earlier on in the week, you think made you feel stressed is still there and yet you feel okay.

You may have already also noticed the reverse of this. I remember this very well when I was a headteacher. That Sunday night feeling where you start to feel the feeling of being at work. And sometimes that can stop you from sleeping because you’re thinking a lot about being at work. You can end up on a Sunday evening, feeling just as stressed, as you do by Wednesday lunchtime. All this, just because you’re caught up with the idea of work. So the circumstance isn’t there, you’re not working, you’re not at work and yet you are experiencing that feeling.

And also, there’s a really interesting little experiment I’ve done with groups of people. This really does shine a light on how one thing can create a different experience in different people. I do some workshops, sometimes where I share three pieces of music with people. I play the three pieces of music, and the people pop the feeling that that piece of music brings to them into the chat.

So there’s something else going on here. There’s something other than the circumstances. Something is playing a part in how we feel the way we feel. I wonder what that could be. Perhaps you can see this playing out in your own life. This is what I’m inviting you to do in this conversation. To just get curious. Just start to notice where it might be playing out. Where in your life are you feeling something about a circumstance that perhaps isn’t quite what it seems?

And one really fun place where you can watch this playing out with other people is watching a movie. I personally cry at most things in movies. I don’t watch scary movies. So I don’t often get scared by movies because I don’t watch scary movies. But I am easily scared by movies if there is something scary. However, I am quite emotional and I tend to cry a lot at movies. Sometimes I’m sat with a couple of people, obviously on the sofa, and I’ll be crying and they’ll be laughing. Or sometimes you know, I’ll be afraid and they’ll think this aspect of the movie is funny.

Just bring that level of curiosity to it.

So, thank you so much for listening.

I’m Clare Downham Queen of Calm and this has been the Calmcast; a time to feel calm and think clearly.